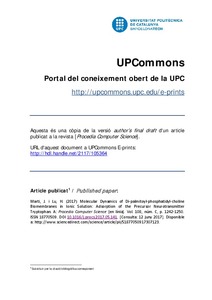 Document typeArticle
PublisherElsevier
Rights accessOpen Access
Abstract
Microscopic structure of a fully hydrated di-palmytoil-phosphatidyl-choline lipid bilayer membrane in the liquid-crystalline phase has been analyzed with all-atom molecular dynamics simulations based on the recently parameterized CHARMM36 force field. Within the membrane, a single molecule of the a-aminoacid tryptophan (precursor of important neurotransmitters such as serotonin and melatonin) has been embedded and its structure and binding sites to water and lipids have been explored. In addition, properties such as radial distribution functions, hydrogen-bonding, energy and pressure profiles and the potentials of mean force of water-tryptophan and lipid-tryptophan have been evaluated. It has been observed that tryptophan usually has a tendency to place itself close to the lipid headgroups but that it can be fully hydrated during short time intervals of the order of a few nanoseconds. This would indicate that, for tryptophan, both hydrophobic forces as well as the attraction to polar sites of the lipids play a significant role in the definition of its structure and binding states.
CitationMarti, J., Lu, H. Molecular dynamics of di-palmitoyl-phosphatidyl-choline biomembranes in ionic solution: adsorption of the precursor neurotransmitter tryptophan. "Procedia computer science", 9 Juny 2017, vol. 108, núm. C, p. 1242-1250.
URIhttp://hdl.handle.net/2117/105364
DOI10.1016/j.procs.2017.05.141
ISSN1877-0509
Publisher versionhttp://www.sciencedirect.com/science/article/pii/S1877050917307123
Collections
Share: