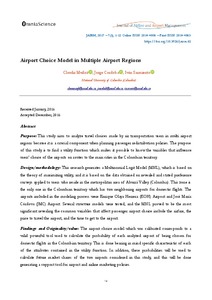 Show full item record
Muñoz, Claudia
Cordoba, Jorge
Sarmiento, Iván
Document typeArticle
PublisherOmniaScience
Rights accessOpen Access
Abstract
Purpose: This study aims to analyze travel choices made by air transportation users in multi airport regions because it is a crucial component when planning passenger redistribution policies. The purpose of this study is to find a utility function which makes it possible to know the variables that influence users’ choice of the airports on routes to the main cities in the Colombian territory. Design/methodology: This research generates a Multinomial Logit Model (MNL), which is based on the theory of maximizing utility, and it is based on the data obtained on revealed and stated preference surveys applied to users who reside in the metropolitan area of Aburrá Valley (Colombia). This zone is the only one in the Colombian territory which has two neighboring airports for domestic flights. The airports included in the modeling process were Enrique Olaya Herrera (EOH) Airport and José María Córdova (JMC) Airport. Several structure models were tested, and the MNL proved to be the most significant revealing the common variables that affect passenger airport choice include the airfare, the price to travel the airport, and the time to get to the airport. Findings and Originality/value: The airport choice model which was calibrated corresponds to a valid powerful tool used to calculate the probability of each analyzed airport of being chosen for domestic flights in the Colombian territory. This is done bearing in mind specific characteristic of each of the attributes contained in the utility function. In addition, these probabilities will be used to calculate future market shares of the two airports considered in this study, and this will be done generating a support tool for airport and airline marketing policies.
Location
1: Medellín, Departament d'Antioquia, Colòmbia
CitationMuñoz, C.; Cordoba, J.; Sarmiento, I. Airport Choice Model in Multiple Airport Regions. "Journal of Airline and Airport Management", Juny 2017, vol. 7, núm. 1, p. 1-12.
URIhttp://hdl.handle.net/2117/105363
DOI10.3926/jairm.62
ISSN2014-4806
Collections
Share: