Improving the fabrication of all-polythiophene supercapacitors 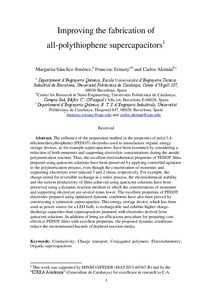 The influence of the preparation method in the properties of poly(3,4-ethylenedioxythiophene) (PEDOT) electrodes used to manufacture organic energy storage devices, as for example supercapacitors, have been examined by considering a reduction of both monomer and supporting electrolyte concentrations during the anodic polymerization reaction. Thus, the excellent electrochemical properties of PEDOT films prepared using quiescent solutions have been preserved by applying controlled agitation to the polymerization process, even though the concentration of monomer and supporting electrolyte were reduced 5 and 2 times, respectively. For example, the charge stored for reversible exchange in a redox process, the electrochemical stability and the current productivity of films achieved using quiescent solutions have been preserved using a dynamic reaction medium in which the concentrations of monomer and supporting electrolyte are several times lower. The excellent properties of PEDOT electrodes prepared using optimized dynamic conditions have also been proved by constructing a symmetric supercapacitor. This energy storage device, which has been used as power source for a LED bulb, is rechargeable and exhibits higher charge-discharge capacities than supercapacitors prepared with electrodes derived from quiescent solutions. In addition of bring an efficacious procedure for preparing cost-effective PEDOT films with excellent properties, the proposed dynamic conditions reduce the environmental hazards of depleted reaction media.
CitationSanchez, M., Estrany, F., Aleman, C. Improving the fabrication of all-polythiophene supercapacitors. "Polymer science series B", 1 Març 2017, vol. 59, núm. 2, p. 194-201.
URIhttp://hdl.handle.net/2117/105283
DOI10.1134/S1560090417020087
ISSN1560-0904
Publisher versionhttps://link.springer.com/article/10.1134%2FS1560090417020087