The Xor embedding: An embedding of hypercubes onto rings and toruses 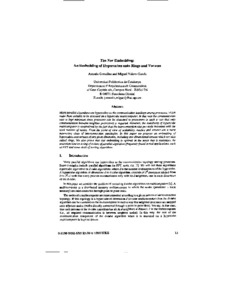 Document typeConference report
PublisherInstitute of Electrical and Electronics Engineers (IEEE)
Rights accessOpen Access
Abstract
Many parallel algorithms use hypercubes as the communication topology among processes, which make them suitable to be executed on a hypercube multicomputer. In this way the communication cost is kept to a minimum since processes can be allocated to processors in such a way that only communication between neighbor processors is required. However, the scalability of hypercube multicomputer is constrained by the fact that the interconnection cost per node increases with the total number of nodes. From the point of view of scalability, meshes and toruses are a more interesting class of interconnection topologies. In this paper the authors propose an embedding of hypercubes onto toruses of any given dimension, incuding one-dimensional toruses which are also called rings. They also prove that the embedding is optimal in the sense that it minimizes the execution time on a ring of a class of parallel algorithms frequently found in real applications, such as FFT and some class of sorting algorithms.
CitationGonzález, A., Valero-García, M. The Xor embedding: An embedding of hypercubes onto rings and toruses. A: International Conference on Application-Specific Array Processors. "International Conference on Application-Specific Array Processors, 1993: proceedings". Vecine: Institute of Electrical and Electronics Engineers (IEEE), 1993, p. 15-28.
URIhttp://hdl.handle.net/2117/105278
DOI10.1109/ASAP.1993.397117
ISBN1063-6862
Publisher versionhttp://ieeexplore.ieee.org/document/397117/
Collections
Share: