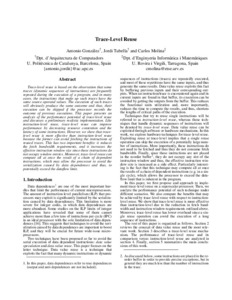 Molina, Carlos
Document typeConference report
PublisherInstitute of Electrical and Electronics Engineers (IEEE)
Rights accessOpen Access
All rights reserved. This work is protected by the corresponding intellectual and industrial property rights. Without prejudice to any existing legal exemptions, reproduction, distribution, public communication or transformation of this work are prohibited without permission of the copyright holder
Abstract
Trace-level reuse is based on the observation that some traces (dynamic sequences of instructions) are frequently repeated during the execution of a program, and in many cases, the instructions that make up such traces have the same source operand values. The execution of such traces will obviously produce the same outcome and thus, their execution can be skipped if the processor records the outcome of previous executions. This paper presents an analysis of the performance potential of trace-level reuse and discusses a preliminary realistic implementation. Like instruction-level reuse, trace-level reuse can improve performance by decreasing resource contention and the latency of some instructions. However, we show that trace-level reuse is more effective than instruction-level reuse because the former can avoid fetching the instructions of reused traces. This has two important benefits: it reduces the fetch bandwidth requirements, and it increases the effective instruction window size since these instructions do not occupy window entries. Moreover, trace-level reuse can compute all at once the result of a chain of dependent instructions, which may allow the processor to avoid the serialization caused by data dependences and thus, to potentially exceed the dataflow limit.
CitationGonzález, A., Tubella, J., Molina, C. Trace-level reuse. A: International Conference on Parallel Processing. "1999 InternationaI Conference on Parallel Processing: 21-24 September 1999, Aizu-Wakamatsu City, Japan: proceedings". Aizu-Wakamatsu: Institute of Electrical and Electronics Engineers (IEEE), 1999, p. 30-37.
URIhttp://hdl.handle.net/2117/105273
DOI10.1109/ICPP.1999.797385
ISBN0-7695-0350-0
Publisher versionhttp://ieeexplore.ieee.org/document/797385/
Collections
Share: