Distribution of dopant ions around poly(3,4-ethylenedioxythiophene) chains: a theoretical study 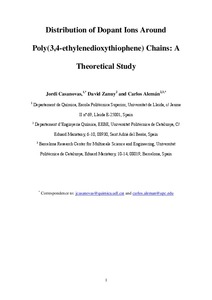 Document typeArticle
Rights accessOpen Access
Abstract
The effect of counterions and multiple polymer chains on the properties and structure of poly(3,4-ethylenedioxythiophene) (PEDOT) doped with ClO4- has been examined using density functional theory (DFT) calculations with periodic boundary conditions (PBCs). Calculations on a one-dimensional periodic model with four explicit polymer repeat units and two ClO4- molecules indicate that the latter are separated as much as possible, with the salt structure and band gap obtained from such ClO4- distribution being in excellent agreement with those determined experimentally. On the other hand, DFT calculations on periodic models that include two chains indicate that neighboring PEDOT chains are shifted along the molecular axis by a half of the repeat unit length, with dopant ions intercalated between the polymer molecules acting as cement. In order to support these structural features, classical molecular dynamics (MD) simulations have been performed on a multiphasic system consisting of 69 explicit PEDOT chains anchored onto a steel surface, explicit ClO4- anions embedded in the polymer matrix, and an acetonitrile phase layer onto the polymer matrix. Analyses of the radial distribution functions indicate that the all-anti conformation, the relative disposition of adjacent PEDOT chains and the distribution of ClO4- dopant ions are fully consistent with periodic DFT predictions. The agreement between two such different methodologies allows reinforcing the microscopic understanding of the PEDOT film structure.
CitationCasanovas Salas, Jordi, Zanuy, D., Aleman, C. Distribution of dopant ions around poly(3,4-ethylenedioxythiophene) chains: a theoretical study. "Physical chemistry chemical physics", 21 Abril 2017, vol. 19, núm. 15, p. 9889-9899.
URIhttp://hdl.handle.net/2117/105272
DOI10.1039/c7cp00857k
ISSN1463-9076
Publisher versionhttp://pubs.rsc.org/en/Content/ArticleLanding/2017/CP/C7CP00857K#!divAbstract
Collections
Share: