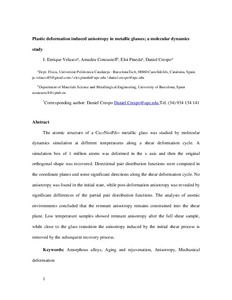 Document typeArticle
Rights accessOpen Access
Abstract
The atomic structure of a Cu13Ni34Pd53 metallic glass was studied by molecular dynamics simulation at different temperatures along a shear deformation cycle. A simulation box of 1 million atoms was deformed in the x axis and then the original orthogonal shape was recovered. Directional pair distribution functions were computed in the coordinate planes and some significant directions along the shear deformation cycle. No anisotropy was found in the initial state, while post-deformation anisotropy was revealed by significant differences of the partial pair distribution functions. The analysis of atomic environments concluded that the remnant anisotropy remains constrained into the shear plane. Low temperature samples showed remnant anisotropy after the full shear sample, while close to the glass transition the anisotropy induced by the initial shear process is removed by the subsequent recovery process.
CitationVelasco , J.E., Concustell, A., Pineda, E., Crespo, D. Plastic deformation induced anisotropy in metallic glasses: A molecular dynamics study. "Journal of alloys and compounds", 15 Juny 2017, vol. 707, p. 102-107.
URIhttp://hdl.handle.net/2117/105250
DOI10.1016/j.jallcom.2016.12.233
ISSN0925-8388
Publisher versionhttp://www.sciencedirect.com/science/article/pii/S0925838816341561
Collections
Share: