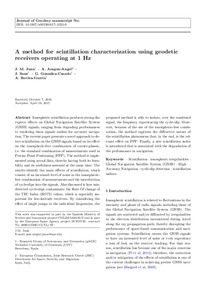 Document typeArticle
Rights accessOpen Access
Abstract
Ionospheric scintillation produces strong disruptive effects on global navigation satellite system (GNSS) signals, ranging from degrading performances to rendering these signals useless for accurate navigation. The current paper presents a novel approach to detect scintillation on the GNSS signals based on its effect on the ionospheric-free combination of carrier phases, i.e. the standard combination of measurements used in precise point positioning (PPP). The method is implemented using actual data, thereby having both its feasibility and its usefulness assessed at the same time. The results identify the main effects of scintillation, which consist of an increased level of noise in the ionospheric-free combination of measurements and the introduction of cycle-slips into the signals. Also discussed is how mis-detected cycle-slips contaminate the rate of change of the total electron content index (ROTI) values, which is especially important for low-latitude receivers. By considering the effect of single jumps in the individual frequencies, the proposed method is able to isolate, over the combined signal, the frequency experiencing the cycle-slip. Moreover, because of the use of the ionospheric-free combination, the method captures the diffractive nature of the scintillation phenomena that, in the end, is the relevant effect on PPP. Finally, a new scintillation index is introduced that is associated with the degradation of the performance in navigation.
CitationJuan, J., Aragon-Angel, M.A., Sanz, J., Gonzalez-Casado, G., Rovira-Garcia, A. A method for scintillation characterization using geodetic receivers operating at 1 Hz. "Journal of geodesy", 8 Maig 2017.
URIhttp://hdl.handle.net/2117/105185
DOI10.1007/s00190-017-1031-0
ISSN0949-7714
Publisher versionhttps://link.springer.com/article/10.1007%2Fs00190-017-1031-0
Collections
Share: