The supersoft X-ray source in V5116 Sagittarii: I. the high resolution spectra 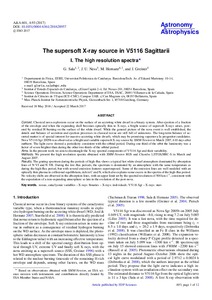 Context. Classical nova explosions occur on the surface of an accreting white dwarf in a binary system. After ejection of a fraction of the envelope and when the expanding shell becomes optically thin to X-rays, a bright source of supersoft X-rays arises, powered by residual H burning on the surface of the white dwarf. While the general picture of the nova event is well established, the details and balance of accretion and ejection processes in classical novae are still full of unknowns. The long-term balance of accreted matter is of special interest for massive accreting white dwarfs, which may be promising supernova Ia progenitor candidates. Nova V5116 Sgr 2005b was observed as a bright and variable supersoft X-ray source by XMM-Newton in March 2007, 610 days after outburst. The light curve showed a periodicity consistent with the orbital period. During one third of the orbit the luminosity was a factor of seven brighter than during the other two thirds of the orbital period. Aims. In the present work we aim to disentangle the X-ray spectral components of V5116 Sgr and their variability. Methods. We present the high resolution spectra obtained with XMM-Newton RGS and Chandra LETGS/HRC-S in March and August 2007. Results. The grating spectrum during the periods of high-flux shows a typical hot white dwarf atmosphere dominated by absorption lines of N VI and N VII. During the low-flux periods, the spectrum is dominated by an atmosphere with the same temperature as during the high-flux period, but with several emission features superimposed. Some of the emission lines are well modeled with an optically thin plasma in collisional equilibrium, rich in C and N, which also explains some excess in the spectra of the high-flux period. No velocity shifts are observed in the absorption lines, with an upper limit set by the spectral resolution of 500 km s-1, consistent with the expectation of a non-expanding atmosphere so late in the evolution of the post-nova.
CitationSala, G., Ness, J.U., Hernanz, M., Greiner, J. The supersoft X-ray source in V5116 Sagittarii: I. the high resolution spectra. "Astronomy & astrophysics", 22 Maig 2017, vol. 601, núm. A93.
URIhttp://hdl.handle.net/2117/105104
DOI10.1051/0004-6361/201628957
ISSN1432-0746
Publisher versionhttps://www.aanda.org/articles/aa/abs/2017/05/aa28957-16/aa28957-16.html