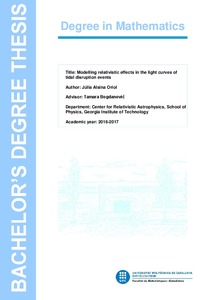 ; Bogdanović, Tamara
CovenanteeCenter for Relativistic Astrophysics
Document typeBachelor thesis
Rights accessOpen Access
Abstract
A star whose orbit takes it on a suffciently close approach to a massive black hole (BH) will be shredded by the black hole's tides. Accretion of stellar debris on the BH gives rise to a characteristic light curve which has been used as a smoking gun in observational searches for tidal disruption events (TDEs) in the past 20 years. Disruptive encounters that occur very close to the MBHs are subject to relativistic effects, leading to an intriguing possibility that information about the space-time of an BH can be encoded in the light curve of a TDE. We explore the effect on the fallback rate of the general relativistic precession of the debris deep in the potential well of a Schwarzschild BH. We investigate the distribution of orbital energy of the debris in such scenarios and use it to assess the magnitude of relativistic effects that may be imprinted in the light curves of TDEs.
SubjectsGeneral relativity (Physics), Relativitat general (Física)
URIhttp://hdl.handle.net/2117/105095
Collections
Share: