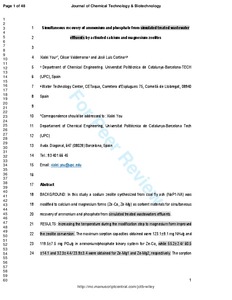 Document typeArticle
Rights accessOpen Access
Abstract
BACKGROUND In this study a sodium zeolite synthesized from coal fly ash (NaP1-NA) was modified to calcium and magnesium forms (Ze-Ca, Ze-Mg) as sorbent materials for simultaneous recovery of ammonium and phosphate from simulated treated wastewater effluents. RESULTS Increasing the temperature during the modification step to magnesium form improved the zeolite conversion. The maximum sorption capacities obtained were 123.1±9.1 mg NH4 g-1 and 119.5±7.5 mg PO4 g-1 in an ammonium/phosphate binary system for Ze-Ca, while 55.2±2.4/ 60.5 ±14.1 and 32.3±4.4/ 23.9±3.4 were obtained for Ze-Mg1 and Ze-Mg2, respectively. The sorption process is faster for Ze-Mg zeolites and the sorption mechanism that controls the overall process, for both zeolites, is diffusion into the particle according to the HPDM and SPM models. CONCLUSIONS Salt modification improved the performance of zeolites towards phosphate sorption. The sorption mechanism involves both ammonium exchange to the Mg and Ca ions, and precipitation of Ca and Mg phosphates or mixed ammonium-magnesium phosphate minerals such as brushite (CaHPO4.H2O) and struvite (MgNH4PO4). © 2017 Society of Chemical Industry
CitationYou, X., Valderrama, C., Cortina, J. Simultaneous recovery of ammonium and phosphate from simulated treated wastewater effluents by activated calcium and magnesium zeolites. "Journal of chemical technology and biotechnology", 1 Gener 2017, p. 1-10.
URIhttp://hdl.handle.net/2117/105070
DOI10.1002/jctb.5249
ISSN1097-4660
Publisher versionhttp://onlinelibrary.wiley.com/doi/10.1002/jctb.5249/abstract;jsessionid=FEEF12A842460ABE65EE40F1F133A2A7.f02t01
Collections
Share: