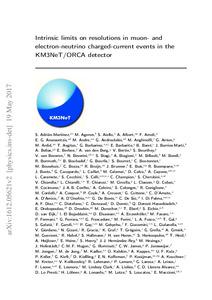 Studying atmospheric neutrino oscillations in the few-GeV range with a multi-megaton detector promises to determine the neutrino mass hierarchy. This is the main science goal pursued by the future KM3NeT/ORCA water Cherenkov detector in the Mediterranean Sea. In this paper, the processes that limit the obtainable resolution in both energy and direction in charged-current neutrino events in the ORCA detector are investigated. These processes include the composition of the hadronic fragmentation products, the subsequent particle propagation and the photon-sampling fraction of the detector. GEANT simulations of neutrino interactions in seawater produced by GENIE are used to study the effects in the 1-20 GeV range. It is found that fluctuations in the hadronic cascade in conjunction with the variation of the inelasticity y are most detrimental to the resolutions. The effect of limited photon sampling in the detector is of significantly less importance. These results will therefore also be applicable to similar detectors/media, such as those in ice.
CitationAgeron, M., Aiello, G., Ameli, F., Andre, M. Intrinsic limits on resolutions in muon- and electron-neutrino charged-current events in the KM3NeT/ORCA detector. "Journal of high energy physics", 1 Maig 2017, vol. 2017, núm. 8.
URIhttp://hdl.handle.net/2117/105007
DOI10.1007/JHEP05(2017)008
ISSN1029-8479
Publisher versionhttps://link.springer.com/article/10.1007%2FJHEP05%282017%29008