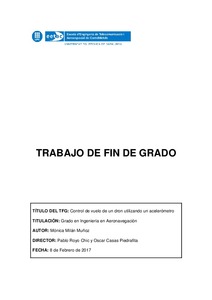 Nowadays the use of unmanned aerial vehicles is becoming increasingly popular. With the intent of integrate them in artistic performances, such as dance, this project exposes the design a new flight control system, which makes piloting easier to the user. The defined control system is based on voluntary hand movements, consequently it results to be much more intuitive than conventional means, as well as it allows a high manoeuvrability. Full architecture is composed by two clearly different parts, the subsystem that detects hand movements and then the drone. Movement acquisition is based on acceleration values and it is carried out by using eZ430-Chronos watch by Texas Instruments, which has integrated a three-axis accelerometer. Afterwards, obtained data is pre-processed to determine movement direction, then a filter is applied in order to disregard hand trembling or minor involuntary hand movements, thus a stable value is achieved. It has been studied and evaluated two different flying devices, the Crazyflie 2.0 by Bitcraze and the AR.Drone 2.0 by Parrot, both quadcopters. Considering the low stability of the first one, it has been determined that the AR.Drone 2.0 is more appropriate according to the purpose of this project. It has been carried out a modelization that consists in the definition of some equilibrium positions as well as movements of interest, so as to send commands to the quadcopter. Finally, it has been performed subsystems integration and after multiple flight tests, it has been concluded that the resulting system is adequate to the proposed application, not only in terms of stability but also in time response.
SubjectsDrone aircraft, Aceleròmetres
URIhttp://hdl.handle.net/2117/104981