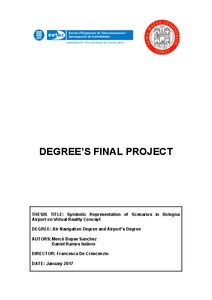 Except where otherwise noted, content on this work is licensed under a Creative Commons license : Attribution-NonCommercial-ShareAlike 3.0 Spain
Abstract
This paper is a part of a big Project named Retina Project, which is focused in reduce the workload of an ATCO. It uses the last technological advances as Virtual Reality concept. The work has consisted in studying the different awareness situations that happens daily in Bologna Airport. It has been analysed one scenario with good visibility where the sun predominates and two other scenarios with poor visibility where the rain and the fog dominate. Due to the study of visibility in the three scenarios computed, the conclusion obtained is that the overlay must be shown with a constant dimension regardless the position of the aircraft to be readable by the ATC and also, the frame and the flight strip should be coloured in a showy colour (like red) for a better control by the ATCO.
SubjectsAirports--Bologna, Aeroports -- Itàlia
DegreeGRAU EN ENGINYERIA D'AEROPORTS (Pla 2010)
Location
1: Via dell'Aeroporto, 40132 Bologna BO, Itàlia
URIhttp://hdl.handle.net/2117/104980
Collections
Share: