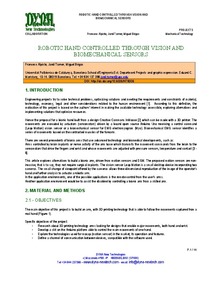 Document typeArticle
Rights accessOpen Access
Abstract
The project aims to design the control of a robotic arm capable of following the movements of a real hand. In order to do that, a number of different technologies were implemented: manufacture by adding material (3D printing), Arduino board programming and implementing and programming of vision and biomechanics sensors. The project was developed in 3 stages: First, making a 3D printing of a robotic arm, which has been acquired with CAD software, for subsequent assembly of all parts. Second, programming of an Arduino Uno, capable of operating actuators (servomotors), to perform the movement of the hand built. Finally, developing a programming code capable of receiving, interpreting and manipulating the data obtained by a mocap device (motion capture), communicating with other devices and sending commands to the Arduino Uno controller chip.
CitationJordi Torner, Alpiste, F., Brigos, M. Robotic arm controlled through vision and biomechanical sensors. "Dyna ingeniería e industria", 11 Maig 2017, vol. 4, p. 1-14.
URIhttp://hdl.handle.net/2117/104940
DOI10.6036/NT8306
ISSN0012-7361
Publisher versionhttp://www.dyna-newtech.com/search-content-NT/robotic-arm-controlled-through-vision-and-biomechanical-sensors
Collections
Share: