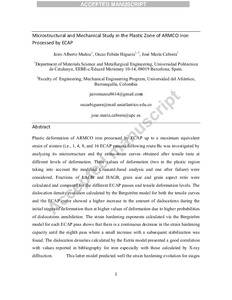 Document typeArticle
Rights accessOpen Access
Abstract
Plastic deformation of ARMCO iron processed by ECAP up to a maximum equivalent strain of sixteen (i.e., 1, 4, 8, and 16 ECAP passes) following route Bc was investigated by analyzing its microstructure and the stress-strain curves obtained after tensile tests at different levels of deformation. Three values of deformation (two in the plastic region taking into account the modified Crussard-Jaoul analysis and one after failure) were considered. Fractions of LAGB and HAGB, grain size and grain aspect ratio were calculated and compared for the different ECAP passes and tensile deformation levels. The dislocation density evolution calculated by the Bergström model for both the tensile curves and the ECAP curve showed a higher increase in the amount of dislocations during the initial stages of deformation than at higher values of deformation due to higher probabilities of dislocations annihilation. The strain hardening exponents calculated via the Bergström model for each ECAP pass shows that there is a continuous decrease in the strain hardening capacity until the eighth pass where a small increase with a subsequent stabilization was found. The dislocation densities calculated by the Estrin model presented a good correlation with values reported in bibliography for iron especially with those calculated by X-ray diffraction. This latter model predicted well the strain hardening evolution for stages III, IV and V for ARMCO iron processed by ECAP, where the main increments in hardening for stages IV and V were coming from the cell interiors.
CitationMuñoz, J., Higuera, O., Cabrera, J. Microstructural and mechanical study in the plastic zone of ARMCO iron processed by ECAP. "Materials science and engineering A. Structural materials properties microstructure and processing", 14 Juny 2017, vol. 697, p. 24-36.
URIhttp://hdl.handle.net/2117/104931
DOI10.1016/j.msea.2017.04.108
ISSN0921-5093
Publisher versionhttp://www.sciencedirect.com/science/article/pii/S0921509317305907
Collections
Share: