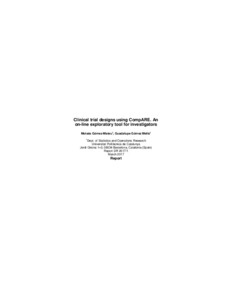 Conclusions from randomized clinical trials (RCT) rely primarily on the primary endpoint (PE) chosen at the design stage of the study. There should generally be only one PE which should be able to provide the most clinically relevant and scientific evidence regarding the potential eficacy of the new treatment. Therefore, it is of utmost importance to select it appropriately. Composite endpoints, consisting of the union of several endpoints, are often used as PE in RCT. Gomez and Lagakos (2013) develop a statistical methodology to evaluate the convenience of using a CE as opposed to one of its components. Their strategy is based on the asymptotic relative eficiency (ARE), relating the efi is based on the asymptotic relative eficiency (ARE), relating the eciency of using the logrank test based on the CE versus the eficiency based on one of its components. This paper introduces the freeware online platform CompARE that facilitates the study of the performance of different candidate endpoints which could be used as PE at the design stage of a trial. CompARE, through an intuitive interface, implements the novel ARE method.