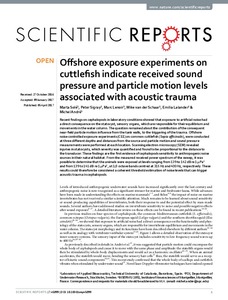 Document typeArticle
PublisherMacmillan Publishers
Rights accessOpen Access
European Commission's projectAQUO - Achieve QUieter Oceans by shipping noise footprint reduction (EC-FP7-314227)
Abstract
Recent findings on cephalopods in laboratory conditions showed that exposure to artificial noise had a direct consequence on the statocyst, sensory organs, which are responsible for their equilibrium and movements in the water column. The question remained about the contribution of the consequent near-field particle motion influence from the tank walls, to the triggering of the trauma. Offshore noise controlled exposure experiments (CEE) on common cuttlefish (Sepia officinalis), were conducted at three different depths and distances from the source and particle motion and sound pressure measurements were performed at each location. Scanning electron microscopy (SEM) revealed injuries in statocysts, which severity was quantified and found to be proportional to the distance to the transducer. These findings are the first evidence of cephalopods sensitivity to anthropogenic noise sources in their natural habitat. From the measured received power spectrum of the sweep, it was possible to determine that the animals were exposed at levels ranging from 139 to 142¿dB re 1¿µPa2 and from 139 to 141 dB re 1¿µPa2, at 1/3 octave bands centred at 315¿Hz and 400¿Hz, respectively. These results could therefore be considered a coherent threshold estimation of noise levels that can trigger acoustic trauma in cephalopods.
CitationSole, M., Sigray, P., Lenoir, M., Van Der Schaar, M., Lalander, E., Andre, M. Offshore exposure experiments on cuttlefish indicate received sound pressure and particle motion levels associated with acoustic trauma. "Scientific reports", 5 Abril 2017, vol. 7.
URIhttp://hdl.handle.net/2117/104914
DOI10.1038/srep45899
ISSN2045-2322
Publisher versionhttps://www.nature.com/articles/srep45899
Collections
Share: