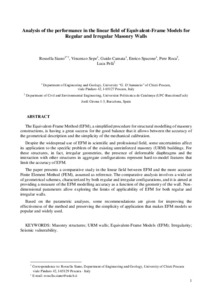 Document typeArticle
Rights accessOpen Access
Abstract
The Equivalent-Frame Method (EFM), a simplified procedure for structural modelling of masonry constructions, is having a great success for the good balance that it allows between the accuracy of the geometrical description and the simplicity of the mechanical calibration. Despite the widespread use of EFM in scientific and professional field, some uncertainties affect its application to the specific problem of the existing unreinforced masonry (URM) buildings. For these structures, in fact, irregular geometries, the presence of deformable diaphragms and the interaction with other structures in aggregate configurations represent hard-to-model features that limit the accuracy of EFM. The paper presents a comparative study in the linear field between EFM and the more accurate Finite Element Method (FEM), assumed as reference. The comparative analysis involves a wide set of geometrical schemes, characterized by both regular and irregular configurations, and it is aimed at providing a measure of the EFM modelling accuracy as a function of the geometry of the wall. Non-dimensional parameters allow exploring the limits of applicability of EFM for both regular and irregular walls. Based on the parametric analyses, some recommendations are given for improving the effectiveness of the method and preserving the simplicity of application that makes EFM models so popular and widely used.
CitationSiano, R., Sepe, V., Camata, G., Spacone, E., Roca, P., Pela, L. Analysis of the performance in the linear field of Equivalent-Frame Models for regular and irregular masonry walls. "Engineering structures", Agost 2017, vol. 145, p. 190-210.
URIhttp://hdl.handle.net/2117/104867
DOI10.1016/j.engstruct.2017.05.017
ISSN0141-0296
Publisher versionhttp://www.sciencedirect.com/science/article/pii/S0141029616307507
Collections
Share: