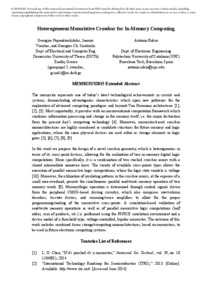 Document typeConference report
PublisherInstitute of Electrical and Electronics Engineers (IEEE)
Rights accessOpen Access
All rights reserved. This work is protected by the corresponding intellectual and industrial property rights. Without prejudice to any existing legal exemptions, reproduction, distribution, public communication or transformation of this work are prohibited without permission of the copyright holder
Abstract
It's been quite a while since scientists are seeking for the ancestor of von Neumann computing architecture. Among the most promising candidates, memristor demonstrates advantageous characteristics, which open new pathways for the exploration of advanced computing paradigms. In this work we propose the design of a novel crossbar geometry, which is heterogeneous in terms of its cross-point devices, allowing for the realization of true in-memory digital logic computations. More specifically, it is a combination of two stacked crossbar arrays with a shared intermediate nanowire layer. The variety of available cross-points types allows the execution of parallel memristive logic computations, where the logic state variable is voltage. Moreover, the utilization of insulating patterns in the crossbar arrays, at the expense of a small area-overhead, permits the simultaneous parallel read/write memory operation of two memory words. Memory/logic operation is determined through control signals driven from the peripheral CMOS-based driving circuitry, which also comprises row/column decoders, tri-state drivers, and summing/ sense amplifiers to allow for the proper programming/reading of the memristive cross-points
CitationPapandroulidakis, G., Vourkas, I., Sirakoulis, G., Rubio, A. Heterogeneous memristive crossbar for in-memory computing. A: International Conference on Memristive Systems. "MEMRISYS 2015 - International Conference on Memristive Systems". Paphos: Institute of Electrical and Electronics Engineers (IEEE), 2015, p. 1-2.
URIhttp://hdl.handle.net/2117/104852
DOI10.1109/MEMRISYS.2015.7378388
ISBN9781467392099
Publisher versionhttp://ieeexplore.ieee.org/xpl/articleDetails.jsp?arnumber=7378388
Collections
Share: