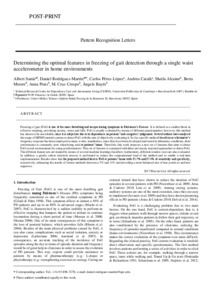 Except where otherwise noted, content on this work is licensed under a Creative Commons license : Attribution-NonCommercial-NoDerivs 3.0 Spain
Abstract
Freezing of gait (FoG) is one of the most disturbing and incapacitating symptoms in Parkinson's disease. It is defined as a sudden block in effective stepping, provoking anxiety, stress and falls. FoG is usually evaluated by means of different questionnaires; however, this method has shown to be not reliable, since it is subjective due to its dependence on patients’ and caregivers’ judgment. Several authors have analyzed the usage of MEMS inertial systems to detect FoG with the aim of objectively evaluating it. So far, specific methods based on accelerometer's frequency response has been employed in many works; nonetheless, since they have been developed and tested in laboratory conditions, their performance is commonly poor when being used at patients’ home. Therefore, this work proposes a new set of features that aims to detect FoG in real environments by using accelerometers. This set of features is compared with three previously reported approaches to detect FoG. The different feature sets are trained by means of several machine learning classifiers; furthermore, different window sizes are also evaluated. In addition, a greedy subset selection process is performed to reduce the computational load of the method and to enable a real-time implementation. Results show that the proposed method detects FoG at patients’ home with 91.7% and 87.4% of sensitivity and specificity, respectively, enhancing the results of former methods between a 5% and 11% and providing a more balanced rate of true positives and true negatives.
CitationSama, A., Rodriguez-Martin, D., Perez, C., Catala, A., Alcaine, S., Mestre, B., Prats, A., Crespo, M. Cruz, Bayés, À. Determining the optimal features in freezing of gait detection through a single waist accelerometer in home environments. "Pattern recognition letters", 17 Maig 2017, vol. 105, p. 135-143.
URIhttp://hdl.handle.net/2117/104840
DOI10.1016/j.patrec.2017.05.009
ISSN0167-8655
Publisher versionhttp://www.sciencedirect.com/science/article/pii/S0167865517301496
Collections
Share: