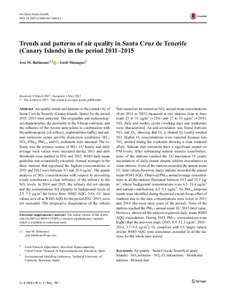 Massagué Obradors, Jordi
Document typeArticle
Rights accessOpen Access
Abstract
Air quality trends and patterns in the coastal city of Santa Cruz de Tenerife (Canary Islands, Spain) for the period 2011–2015 were analyzed. The orographic and meteorological characteristics, the proximity to the African continent, and the influence of the Azores anticyclone in combination with the anthropogenic (oil refinery, road/maritime traffic) and natural emissions create specific dispersion conditions. SO2, NO2, PM10, PM2.5, and O3 pollutants were assessed. The refinery was the primary source of SO2; EU hourly and daily average limit values were exceeded during 2011 and alert thresholds were reached in 2011 and 2012. WHO daily mean guideline was occasionally exceeded. Annual averages in the three stations that registered the highest concentrations in 2011 and 2012 were between 9.3 and 20.4 µg/m3. The spatial analysis of SO2 concentrations with respect to prevailing winds corroborates a clear influence of the refinery to the SO2 levels. In 2014 and 2015, the refinery did not operate and the concentrations fell abruptly to background levels of 2.5–7.1 µg/m3 far below from WHO AQG. NO2 EU limit values, as well as WHO AQG for the period 2011–2015, were not exceeded. The progressive dieselization of the vehicle fleet caused an increment on NO2 annual mean concentrations (from 2011 to 2015) measured at two stations close to busy roads 25 to 31 µg/m3 (+21%) and 27 to 35 µg/m3 (+29%). NOx daily and weekly cycles (working days and weekends) were characterized. An anti-correlation was found between NOx and O3, showing that O3 is titrated by locally emitted NO. Higher O3 concentrations were reported because less NOx emitted during the weekends showing a clear weekend effect. Saharan dust intrusions have a significant impact on PM levels. After subtracting natural sources contribution, none of the stations reached the EU maximum 35 yearly exceedances of daily means despite seldom exceedances at some stations. None of the stations exceeded the annual mean EU limit values; however, many stations exceeded the annual mean WHO AQG. Observed PM10 annual average concentrations in all the stations fluctuated between 10.1 and 35.3 µg/m3, where background concentrations were 6.5–24.4 µg/m3 and natural contributions: 4.2–9.1 µg/m3. No PM10 temporal trends were identified during the period except for an effect of washout due to the rain: concentrations were lower in 2013 and 2014 (the most rainy years of the period). None of the stations reached the PM2.5 annual mean EU 2015 limit value. However, almost all the stations registered daily mean WHO AQG exceedances. During 2015, PM2.5 concentrations were higher than the previous years (2015, 8.8–12.3 µg/m3; 2011–2014, 3.7–9.6 µg/m3). O3 complied with EU target values; stricter WHO AQG were sometimes exceeded in all the stations for the whole time period
CitationBaldasano, J., Massague, J. Trends and patterns of air quality in Santa Cruz de Tenerife (Canary Islands) in the period 2011–2015. "Air quality atmosphere and health", 17 Maig 2017.
URIhttp://hdl.handle.net/2117/104803
DOI10.1007/s11869-017-0484-x
ISSN1873-9318
Publisher versionhttp://link.springer.com/article/10.1007/s11869-017-0484-x
Collections
Share: