A fractal fragmentation model for rockfalls 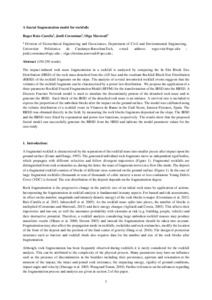 The impact-induced rock mass fragmentation in a rockfall is analyzed by comparing the in situ block size distribution (IBSD) of the rock mass detached from the cliff face and the resultant rockfall block size distribution (RBSD) of the rockfall fragments on the slope. The analysis of several inventoried rockfall events suggests that the volumes of the rockfall fragments can be characterized by a power law distribution. We propose the application of a three-parameter rockfall fractal fragmentation model (RFFM) for the transformation of the IBSD into the RBSD. A discrete fracture network model is used to simulate the discontinuity pattern of the detached rock mass and to generate the IBSD. Each block of the IBSD of the detached rock mass is an initiator. A survival rate is included to express the proportion of the unbroken blocks after the impact on the ground surface. The model was calibrated using the volume distribution of a rockfall event in Vilanova de Banat in the Cadí Sierra, Eastern Pyrenees, Spain. The RBSD was obtained directly in the field, by measuring the rock block fragments deposited on the slope. The IBSD and the RBSD were fitted by exponential and power law functions, respectively. The results show that the proposed fractal model can successfully generate the RBSD from the IBSD and indicate the model parameter values for the case study.