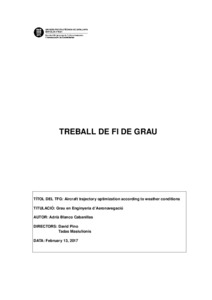 In a currently congested and overbooked airspace, institutions and users of the aeronautical sector increasingly need a major organization and optimization of the air routes in order of reducing any kind of cost and mainly concerning about minimizing aircraft delays and flight time durations. It has been for this reason that this project makes some first steps into this topic with the design, programming and simulation of a sort of new tools in terms of improving airplane's trajectories in a specific and relevant field of the aerial navigation: the meteorology. First of all, an introductory and theoretical study about aviation weather has been done being directly related with any type of flight, even it has been mainly focused on commercial ones. This short summary, gives a future user of this tool the appropriate environment, allowing him to easily recognize the causes of the obtained results that are associated to specific meteorological phenomena. Secondly, the methodology used to design a Matlab program able to optimize aerial trajectories in function of atmospheric conditions has been explained. In this step, the procedure to obtain the meteorological data has also been detailed including its process and its respective worldwide cartographic representation to furthermore define the required algorithms to minimize the total flight length through wind currents and precipitation in every different scenario. Once the software's performance has been explained, several simulations have been run for real and theoretical cases in terms of visualizing the functionality of the program for different situations. Initially, as a real scenario, three possible commercial long, mid and short distance routes have been simulated between Barcelona and Tokyo, Moscow and Vienna. Additionally, some fictional simulations have been performed in terms of visualizing how the modification of their initial airspeeds and their path through different weather systems could influence the performance of the software. The project not only analyzes the appropriate performance of the program, but also explains what could suppose the implementation of a software like this in basic but realistic route planning.
SubjectsNavigation--Technological innovations, Navegació aèria
URIhttp://hdl.handle.net/2117/104677