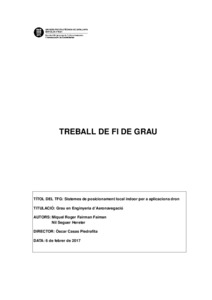 Document typeBachelor thesis
Rights accessOpen Access
Abstract
This document consists of the study and implementation of the control and the indoor local positioning of drones. It is divided into three different parts. The first one is about the theoretical study of the global and local current positioning systems. The types of local positioning systems are described and they will be compared based on the different technologies they use such as radiofrequency, laser, magnetic and computer vision. Then, it is studied and investigated the basis of the project, the open source drone Crazyflie that will be used for the remote passive location systems and Parrot AR.Drone for the remote active location system. A primary control system will be developed in order to fly the Crazyflie and this system will include a fall safe to protect the drone in case it falls. Finally, some different local positioning systems have been studied as well as their characteristics and the possibility to implement and integrate them into our project. Computer vision has been chosen to deploy the system for being economically cheap and easy to implement. Using the Python programming language, the open library OpenCV for computer vision and taking advantage of open source software of the two drones that we work with, the control and positioning have been carried out. Experimentally, it has been tried to position the drones into a target area using computer vision. Unfortunately we have not been able to stabilize the Crazyflie for more than 2 seconds inside the desired area.
SubjectsGlobal Positioning System, Sistema de posicionament global
URIhttp://hdl.handle.net/2117/104675
Collections
Share: