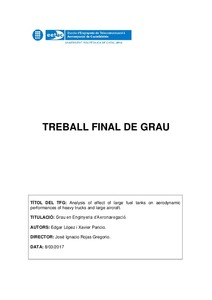 Except where otherwise noted, content on this work is licensed under a Creative Commons license : Attribution-NonCommercial-ShareAlike 3.0 Spain
Abstract
Nowadays, 90% of the worldwide vehicles work with fossil fuels. Use of fossil fuels contributes to the greenhouse effect and, to increase the pollution worldwide. Hydrogen has been suggested as a possible alternative to fossil fuels. However, the use of hydrogen as fuel implies using, different fuel tanks. Due to its lower energy density, hydrogen requires fuel tanks with larger volume than conventional fuels, for an equivalent amount of energy released. The larger tanks modify the external geometry of the vehicle and therefore the aerodynamics are also different. The aim of this project is to carry out an experimental and Computational Fluid Dynamics (CFD) analysis of an Airbus A320 and a tanker truck for which the geometries have been modified accounting for the larger hydrogen fuel tanks needed. Then, the aerodynamic performances of the modified vehicles are compared with the reference conventional A320 and tanker truck. The software used in this analysis is ANSYS Fluent. As in other CFD analysis, the procedure we followed consisted of these steps: generation of the geometry, meshing, definition of the boundary conditions and the physics of the problem, solving, processing of the results. Firstly, the A320 and tanker truck fuel tank modelling have been done in order to stock up the same quantity of fuel as before and to keep an equivalent energy. The modelling process has been performed thinking about the worst possible aerodynamics case. Furthermore, the control volume dimensions have been chosen, that is, the fluid field domain around the target body. Dimensions of the control volume have to be sufficiently big in order to not disrupt the simulation. ANSYS Meshing allowed us to do the mesh. We have tried that cells were refined as much as possible into the interest zones. The mesh quality parameters have been considered to ensure that the simulation is reliable. For the Airbus A320 study, two simulations have been carried out, the first one without any modification and the second one considering the implementation of hydrogen as fuel. For the tanker truck study, three simulations have been carried out, the first one without any modification, the second one considering that is constituted by one single hydrogen tank and the last one considering that is constituted by two hydrogen tanks in order to improve the manoeuvrability. The idea is to compare the simulations to better understand what is happening in each vehicle. It has been seen that the modified A320 presents an increase on drag and lift forces. To be able to overcome this increase on drag, extra fuel will be burnt. Furthermore, because of the implementation of the hydrogen tank, the aircrafts structure weights more than before. However, as hydrogen is now the fuel and it weighs less than Jet A, the total weight of the aircraft is reduced. In this way, we do not need to fly with any AOA higher than the actual one because the current lift is able to compensate the weight of the aircraft. Pitifully, hydrogen is so expensive at present day, and its implementation would be very expensive for airlines. Regarding the tanker truck modifications, the tanker truck constituted by two hydrogen tanks presents the higher increase on drag. However, is not too much larger than the one single hydrogen tank tanker truck. Because of the higher manoeuvrability, it is thought that it would be the best option. We printed 3D models of the A320 studied geometries and tested them in a wind tunnel to measure experimentally the aerodynamic performances and compare them with the results of the CFD simulations. From this analysis, appears that there are many external factors that affect the experiment. However, it has been seen that the modified aircraft presents more drag because of the new fuel tank and the efficiency also diminishes.
SubjectsAirplanes--Fuel tanks, Avions -- Combustibles
DegreeGRAU EN ENGINYERIA D'AERONAVEGACIÓ (Pla 2010)
URIhttp://hdl.handle.net/2117/104673
Collections
Share: