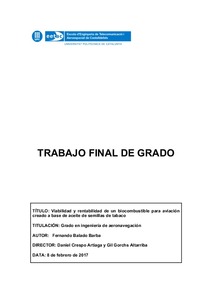 This document presents a study about the viability and profability of a bio jet fuel production made of tobacco seeds oil. Firstly, an analisis about the state and role that bio jet fuel plays nowadays in the aeronautic industry is made, finding that although more than 2500 flights have been successfully operated using alternative fuels until 2016, vegetable oil based bio jet fuel productions represent an inexperienced study field, with great expectations and future ahead. Aeronautic organizations and airlines had commited with the main goal of neutralize green house growing emissions by 2020 and reduce by half of the levels reported in 2005 by 2050, bio jet fuels have become the main way of achieving that goal. Furthermore, economic fines will be charged to the companies that will not fulfill the emission level requirements. In 2011, Hydrotreated Esters of Fatty Acids HEFA technology is approved inside the ASTM D7566-11 standard. The standard allows fabrication and comercialization of biojet fuels made of vegetable seed oils. Talking about viability, the biojet fuel production made of tobacco seed oil is viable at a local level. Spain, a country with small tobacco productions, has the power to produce about 2 million liters of biojet fuel, allowing to satisfy about 22% of the anual fuel consumption used in the route Barcelona-Mallorca operated by a low cost airliner like Vueling, helping to reduce the green house emissions produced in that route. Finally, it is concluded that the individual process of fabricating biojet fuel with tobacco seed oil is not profitable selling at competitive prices, however; the global process taking into account co-products generated, it is profitable and competitive in the market.
SubjectsJet planes--Fuel, Biocombustibles
URIhttp://hdl.handle.net/2117/104672