Influence of Si substitution on the reactivity of a-tricalcium phosphate 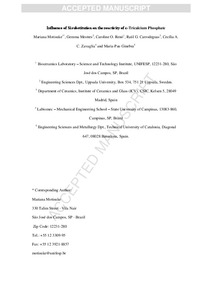 Except where otherwise noted, content on this work is licensed under a Creative Commons license : Attribution-NonCommercial-NoDerivs 3.0 Spain
Abstract
Silicon substituted calcium phosphates have been widely studied over the last ten years due to their enhanced osteogenic properties. Notwithstanding, the role of silicon on a-TCP reactivity is not clear yet. Therefore, the aim of this work was to evaluate the reactivity and the properties of Si-a-TCP in comparison to a-TCP. Precursor powders have similar properties regarding purity, particle size distribution and specific surface area, which allowed a better comparison of the Si effects on their reactivity and cements properties. Both Si-a-TCP and a-TCP hydrolyzed to a calcium-deficient hydroxyapatite when mixed with water but their conversion rates were different. Si-a-TCP exhibited a slower setting rate than a-TCP, i.e. kSSA for Si-TCP (0.021 g·m- 2·h- 1) was almost four times lower than for a-TCP (0.072 g·m- 2·h- 1). On the other hand, the compressive strength of the CPC resulting from fully reacted Si-a-TCP was significantly higher (12.80 ± 0.38 MPa) than that of a-TCP (11.44 ± 0.54 MPa), due to the smaller size of the entangled precipitated apatite crystals.
CitationMotisuke, M., Mestres, G., Renó, C., Carrodeguas, R. G., Zavaglia, C., Ginebra, M.P. Influence of Si substitution on the reactivity of a-tricalcium phosphate. "Materials science and engineering C. Biomimetic and supramolecular systems", 1 Juny 2017, vol. 75, p. 816-821.
URIhttp://hdl.handle.net/2117/104651
DOI10.1016/j.msec.2017.02.099
ISSN0928-4931
Publisher versionhttp://www.sciencedirect.com/science/article/pii/S0928493116321300
Collections
Share: