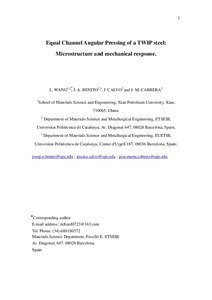 Document typeArticle
PublisherSpringer
Rights accessOpen Access
Abstract
A Fe–20.1Mn–1.23Si–1.72Al–0.5C TWIP steel with ultrafine grain structure was successfully processed through equal channel angular pressing (ECAP) at warm temperature up to four passes following the BC route. The microstructure evolution was characterized by electron backscattered diffraction to obtain the grain maps, which revealed an obvious reduction in grain size, as well as a decrease in the twin fraction, with increasing number of ECAP passes. The texture evolution during ECAP was analyzed by orientation distribution function. The results show that the annealed material presents brass (B) as dominant component. After ECAP, the one pass sample presents A1* and A2* as the strongest components, while the two passes and four passes samples change gradually toward B/B¯B/B¯ components. TEM analysis shows that all samples present twins. The twin thickness is reduced with increasing the number of ECAP passes. Nano-twins, as a result of secondary twinning, are also observed in the one and two passes samples. In the four passes sample, the microstructure is extensively refined by the joint action of ultrafine subgrains, grains and twins. The mechanical behavior was studied by tensile samples, and it was found that the yield strength and the ultimate tensile strength are significantly enhanced at increasing number of ECAP passes. Although the ductility and strain hardening capability are reduced with ECAP process, the present TWIP steel shows significant uniform deformation periods with positive work hardening rates.
CitationWang, L., Benito, J., Calvo, J., Cabrera, J. Equal channel angular pressing of a TWIP steel: microstructure and mechanical response. "Journal of materials science", 1 Juny 2017, vol. 52, núm. 11, p. 6291-6309.
URIhttp://hdl.handle.net/2117/104648
DOI10.1007/s10853-017-0862-7
ISSN0022-2461
Publisher versionhttps://link.springer.com/article/10.1007%2Fs10853-017-0862-7
Collections
Share: