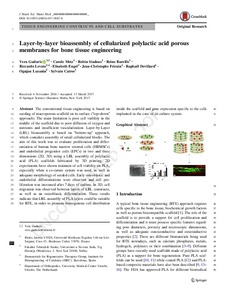 The conventional tissue engineering is based on seeding of macroporous scaffold on its surface (“top–down” approach). The main limitation is poor cell viability in the middle of the scaffold due to poor diffusion of oxygen and nutrients and insufficient vascularization. Layer-by-Layer (LBL) bioassembly is based on “bottom–up” approach, which considers assembly of small cellularized blocks. The aim of this work was to evaluate proliferation and differentiation of human bone marrow stromal cells (HBMSCs) and endothelial progenitor cells (EPCs) in two and three dimensions (2D, 3D) using a LBL assembly of polylactic acid (PLA) scaffolds fabricated by 3D printing. 2D experiments have shown maintain of cell viability on PLA, especially when a co-cuture system was used, as well as adequate morphology of seeded cells. Early osteoblastic and endothelial differentiations were observed and cell proliferation was increased after 7 days of culture. In 3D, cell migration was observed between layers of LBL constructs, as well as an osteoblastic differentiation. These results indicate that LBL assembly of PLA layers could be suitable for BTE, in order to promote homogenous cell distribution inside the scaffold and gene expression specific to the cells implanted in the case of co-culture system.
CitationGuduric, V., Metz, C., Robin, S., Bareille, R., Levato, R., Engel, E., Fricain, J., Devillärd, R., Luzanin, O., Catros, S. Layer-by-layer bioassembly of cellularized polylactic acid porous 3 membranes for bone tissue engineering. "Journal of materials science. Materials in medicine", 22 Març 2017, p. 2-11.
URIhttp://hdl.handle.net/2117/104640
DOI10.1007/s10856-017-5887-6
ISSN0957-4530