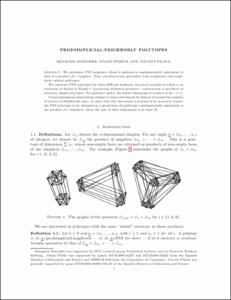 Pilaud, Vincent
Document typeArticle
Rights accessOpen Access
Abstract
We introduce PSN polytopes whose k-skeleton is combinatorially equivalent to that of a product of r simplices. They simultaneously generalize both neighborly and neighborly cubical polytopes. We construct PSN polytopes by three different methods, the most versatile of which is an extension of Sanyal & Ziegler’s “projecting deformed products” construction to products of arbitrary simple polytopes. For general r and k, the lowest dimension we achieve is 2k+r+1. Using topological obstructions similar to those introduced by Sanyal to bound the number of vertices of Minkowski sums, we show that this dimension is minimal if we moreover require the PSN polytope to be obtained as a projection of a polytope combinatorially equivalent to the product of r simplices, when the sum of their dimensions is at least 2k.
CitationMatschke, B.; Pfeifle, J.; Pilaud, V. Prodsimplicial-neighborly polytopes. "Discrete and computational geometry", Novembre 2010, vol. Online first.
URIhttp://hdl.handle.net/2117/10458
DOI10.1007/s00454-010-9311-yOnline First™
ISSN0179-5376
Collections
Share: