Spherocylindrical microplane constitutive model for shale and other anisotropic rocks 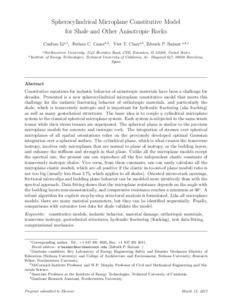 T. Chau, Viet
P. Bažant, Zdenek
Document typeArticle
Rights accessOpen Access
Abstract
Constitutive equations for inelastic behavior of anisotropic materials have been a challenge for decades. Presented is a new spherocylindrical microplane constitutive model that meets this challenge for the inelastic fracturing behavior of orthotropic materials, and particularly the shale, which is transversely isotropic and is important for hydraulic fracturing (aka fracking) as well as many geotechnical structures. The basic idea is to couple a cylindrical microplane system to the classical spherical microplane system. Each system is subjected to the same strain tensor while their stress tensors are superposed. The spherical phase is similar to the previous microplane models for concrete and isotropic rock. The integration of stresses over spherical microplanes of all spatial orientations relies on the previously developed optimal Gaussian integration over a spherical surface. The cylindrical phase, which is what creates the transverse isotropy, involves only microplanes that are normal to plane of isotropy, or the bedding layers, and enhance the stiffness and strength in that plane. Unlike all the microplane models except the spectral one, the present one can reproduce all the five independent elastic constants of transversely isotropic shales. Vice versa, from these constants, one can easily calculate all the microplane elastic moduli, which are all positive if the elastic in-to-out-of plane moduli ratio is not too big (usually less than 3.75, which applies to all shales). Oriented micro-crack openings, frictional micro-slips and bedding plane behavior can be modeled more intuitively than with the spectral approach. Data fitting shows that the microplane resistance depends on the angle with the bedding layers non-monotonically, and compressive resistance reaches a minimum at 60°. A robust algorithm for explicit step-by-step structural analysis is formulated. Like all microplane models, there are many material parameters, but they can be identified sequentially. Finally, comparisons with extensive test data for shale validate the model.
CitationCunbao, L., Caner, F.C., T., V., P. Bažant, Z. Spherocylindrical microplane constitutive model for shale and other anisotropic rocks. "Journal of the mechanics and physics of solids", 1 Juny 2017, vol. 103, p. 155-178.
URIhttp://hdl.handle.net/2117/104550
DOI10.1016/j.jmps.2017.03.006
ISSN0022-5096
Collections
Share: