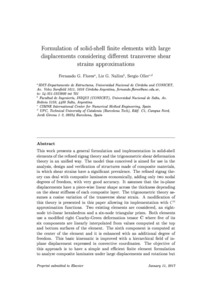 Except where otherwise noted, content on this work is licensed under a Creative Commons license : Attribution-NonCommercial-NoDerivs 3.0 Spain
Abstract
This work presents a general formulation and implementation in solid-shell elements of the refined zigzag theory and the trigonometric shear deformation theory in an unified way. The model thus conceived is aimed for use in the analysis, design and verification of structures made of composite materials, in which shear strains have a significant prevalence. The refined zigzag theory can deal with composite laminates economically, adding only two nodal degrees of freedom, with very good accuracy. It assumes that the in-plane displacements have a piece-wise linear shape across the thickness depending on the shear stiffness of each composite layer. The trigonometric theory assumes a cosine variation of the transverse shear strain. A modification of this theory is presented in this paper allowing its implementation with C0 approximation functions. Two existing elements are considered, an eight-node tri-linear hexahedron and a six-node triangular prism. Both elements use a modified right Cauchy-Green deformation tensor View the MathML source where five of its six components are linearly interpolated from values computed at the top and bottom surfaces of the element. The sixth component is computed at the element center and it is enhanced with an additional degree of freedom. This basic kinematic is improved with a hierarchical field of in-plane displacements expressed in convective coordinates. The objective of this approach is to have a simple and efficient finite element formulation to analyze composite laminates under large displacements and rotations but small elastic strains. The assumed natural strain technique is used to prevent transverse shear locking. An analytic through-the-thickness integration and one point integration on the shell plane is used requiring hourglass stabilization for the hexahedral element. Several examples are considered on the one hand to compare with analytical static solutions of plates, and on the other hand to observe natural frequencies, buckling loads and the non-linear large displacement behavior in double curved shells. The results obtained are in a very good agreement with the targets used.
CitationFlores, F., Nallim, L., Oller, S. Formulation of solid-shell finite elements with large displacements considering different transverse shear strains approximations. "Finite elements in analysis and design", Agost 2017, vol. 130, p. 39-52.
URIhttp://hdl.handle.net/2117/104508
DOI10.1016/j.finel.2017.03.001
ISSN0168-874X
Publisher versionhttp://www.sciencedirect.com/science/article/pii/S0168874X16304528
Collections
Share: