Nonlinear signaling on biological networks: The role of stochasticity and spectral clustering 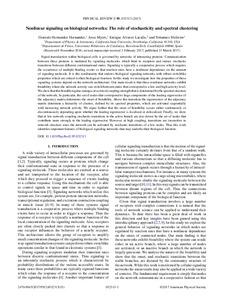 Signal transduction within biological cells is governed by networks of interacting proteins. Communication between these proteins is mediated by signaling molecules which bind to receptors and induce stochastic transitions between different conformational states. Signaling is typically a cooperative process which requires the occurrence of multiple binding events so that reaction rates have a nonlinear dependence on the amount of signaling molecule. It is this nonlinearity that endows biological signaling networks with robust switchlike properties which are critical to their biological function. In this study we investigate how the properties of these signaling systems depend on the network architecture. Our main result is that these nonlinear networks exhibit bistability where the network activity can switch between states that correspond to a low and high activity level. We showthat this bistable regime emerges at a critical coupling strength that is determined by the spectral structure of the network. In particular, the set of nodes that correspond to large components of the leading eigenvector of the adjacency matrix determines the onset of bistability. Above this transition the eigenvectors of the adjacency matrix determine a hierarchy of clusters, defined by its spectral properties, which are activated sequentially with increasing network activity. We argue further that the onset of bistability occurs either continuously or discontinuously depending upon whether the leading eigenvector is localized or delocalized. Finally, we show that at low network coupling stochastic transitions to the active branch are also driven by the set of nodes that contribute more strongly to the leading eigenvector. However, at high coupling, transitions are insensitive to network structure since the network can be activated by stochastic transitions of a few nodes. Thus this work identifies important features of biological signaling networks that may underlie their biological function.
CitationHernadez-Hernandez, G., Myers, J., Alvarez-Lacalle, E., Shiferaw, Y. Nonlinear signaling on biological networks: The role of stochasticity and spectral clustering. "Physical review E", 13 Març 2017, vol. 95, núm. 3.
URIhttp://hdl.handle.net/2117/104500
DOI10.1103/PhysRevE.95.032313
ISSN2470-0045
Publisher versionhttps://journals.aps.org/pre/abstract/10.1103/PhysRevE.95.032313