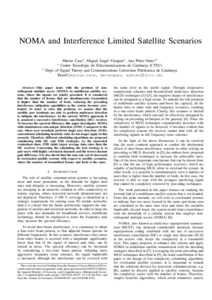 Document typeConference report
PublisherInstitute of Electrical and Electronics Engineers (IEEE)
Rights accessOpen Access
European Commission's projectSANSA - Shared Access Terrestrial-Satellite Backhaul Network enabled by Smart Antennas (EC-H2020-645047)
Abstract
This paper deals with the problem of non-orthogonal multiple access (NOMA) in multibeam satellite systems, where the signals are jointly precoded. It is considered that the number of frames that are simultaneously transmitted is higher than the number of feeds, reducing the precoding interference mitigation capabilities as the system becomes overloaded. In order to solve this problem, we assume that the satellite user terminals are able to perform multi-user detection to mitigate the interference. In the current NOMA approach, it is assumed a successive interference cancellation (SIC) receiver. To increase the spectral efficiency, this paper investigates NOMA with simultaneous non-unique detection (SND). Compared to the case where user terminals perform single user detection (SUD), conventional scheduling heuristic rules do not longer apply in this scenario. Therefore, different scheduling algorithms are proposed considering both SIC and SND strategies. As the numerical evaluations show, SND yields larger average data rates than the SIC receiver. Concerning the scheduling, the best strategy is to pair users with highly correlated channels and the lowest channel gain difference. It is also shown that the sum-rate can be increased in overloaded satellite systems with respect to satellite scenarios, where the number of transmitted frames and feeds is the same.
CitationCaus, M., Vázquez, M., Perez, A. NOMA and interference limited satellite scenarios. A: Asilomar Conference on Signals, Systems, and Computers. "Conference record of the fiftieth Asilomar Conference on Signals, Systems and Computers". Pacific Grove - California: Institute of Electrical and Electronics Engineers (IEEE), 2016, p. 497-505.
URIhttp://hdl.handle.net/2117/104486
DOI10.1109/ACSSC.2016.7869089
ISBN978-1-5386-3954-2
Publisher versionhttp://ieeexplore.ieee.org/document/7869089/
Collections
Share: