Analysis of flame retardants in marine organisms of Antarctic: Evaluation of long-range transport of these emerging pollutants 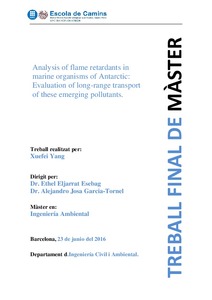 Document typeMaster thesis
Rights accessOpen Access
Abstract
Persistent organic pollutants (POPs) are toxic chemicals that adversely affect human health and the environment around the world. The Stockholm Convention defined four criteria of POPs for persistence, bioaccumulation, potential for long-range transport and toxicity. Polybrominated diphenyl ethers (PBDEs) and hexabromocyclododecane (HBCD) are the most used flame retardants (FRs) that are POPs regulated under the Stockholm Convention. Their production has been banned in Europe and North America. Hence new brominated FRs (BFRs) are used as substitutes; as well as chlorinated FRs, such as dechloranes. Over the years, presence of POPs has been detected in remote areas like Arctic and Antarctic. Although there are very few human impacts because of the geographic isolation and extreme climate, researches have demonstrated that POPs have reached this isolated continent and ocean area unfortunately. The present study investigates the occurrence of PBDEs, emerging BFRs and dechloranes in a total of 31 samples of 2 species of seals (Mirounga leonina and Arctocephalus gazella) collected in Livingston Island and Penguin Island (Antarctica). The samples correspond to different tissues: muscle, nervous system, fat and fur. The main aims of this study are: 1) to detect the presence of emerging FRs in these samples which can prove the transport capacity of long range with risks to the environment and living beings; 2) to assess the degree of exposure of these seals in this area with the levels of FRs found and compare them with other studies published in areas of the Antarctic. PBDEs, dechloranes and HBCDs were detected in some samples with the same order of magnitude (low ng/g lipid weight (lw)). In terms of examined PBDEs, BDE-28 and BDE-47 were the predominant pollutants in fat and fins samples with lower concentrations comparing with previous studies. As for dechloranes, Dec 602 showed the presence in fins, fat and nervous system samples while anti-DP was only detected in fat samples. In the case of HBCD, only γ-HBCD was found in fat samples. These results showed that Dec 602 and anti-DP, as well as PBDEs and HBCD, have the ability to be transported to long distance.
SubjectsMarine sediments, Sediments marins
DegreeMÀSTER UNIVERSITARI EN ENGINYERIA AMBIENTAL (Pla 2014)
URIhttp://hdl.handle.net/2117/104428
Collections
Share: