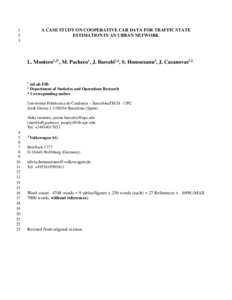 The use of floating car data as a particular case of probe vehicle data has been the object of extensive research for estimating traffic conditions, travel times, and origin-to-destination trip matrices. It is based on data collected from a GPS-equipped vehicle fleet or available cell phones. Cooperative cars with vehicle-to-vehicle and vehicle-to-infrastructure communication capabilities represent a step forward, as they also allow tracking of vehicles surrounding the equipped car. This paper presents the results of a limited experiment with a small fleet of cooperative cars in the central business district of Barcelona, Spain, known as L’Eixample District. Data collected from the experiment were used to build and calibrate the emulation of cooperative functions in a microscopic simulation model that captured the behavior of vehicle sensors in Barcelona’s central business district. Such a calibrated model allows emulating fleet data on a large scale that goes far beyond what a small fleet of cooperative vehicles could capture. To determine the traffic state, several approaches were developed for estimating traffic variables—whose accuracy depends on the penetration level of the technology—on the basis of extensions of Edie’s generalized definitions of the fundamental traffic variables with the emulated data.
CitationLídia Montero, Pacheco, M., Barcelo, J., Homoceanu, S., Casanovas, J. Case study on cooperative car data for estimating traffic states in an urban network. "Transportation research record", 1 Octubre 2016, núm. 2594, p. 127-137.
URIhttp://hdl.handle.net/2117/104399
DOI10.3141/2594-16
ISSN0361-1981
Publisher versionhttp://trrjournalonline.trb.org/doi/abs/10.3141/2594-16