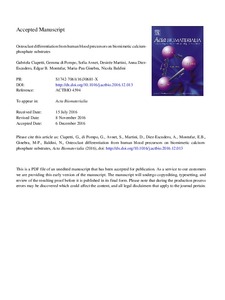 The design of synthetic bone grafts to foster bone formation is a challenge in regenerative medicine. Understanding the interaction of bone substitutes with osteoclasts is essential, since osteoclasts not only drive a timely resorption of the biomaterial, but also trigger osteoblast activity. In this study, the adhesion and differentiation of human blood-derived osteoclast precursors (OCP) on two different micro-nanostructured biomimetic hydroxyapatite materials consisting in coarse (HA-C) and fine HA (HA-F) crystals, in comparison with sintered stoichiometric HA (sin-HA, reference material), were investigated. Osteoclasts were induced to differentiate by RANKL-containing supernatant using cell/substrate direct and indirect contact systems, and calcium (Ca++) and phosphorus (P5+) in culture medium were measured. We observed that OCP adhered to the experimental surfaces, and that osteoclast-like cells formed at a rate influenced by the micro- and nano-structure of HA, which also modulate extracellular Ca++. Qualitative differences were found between OCP on biomimetic HA-C and HA-F and their counterparts on plastic and sin-HA. On HA-C and HA-F cells shared typical features of mature osteoclasts, i.e. podosomes, multinuclearity, tartrate acid phosphatase (TRAP)-positive staining, and TRAP5b-enzyme release. However, cells were less in number compared to those on plastic or on sin-HA, and they did not express some specific osteoclast markers. In conclusion, blood-derived OCP are able to attach to biomimetic and sintered HA substrates, but their subsequent fusion and resorptive activity are hampered by surface micro-nano-structure. Indirect cultures suggest that fusion of OCP is sensitive to topography and to extracellular calcium.
CitationCiapetti, G., Pompo, G., Avnet, S., Martini, D., Diez, A., Montufar, Edgar B., Ginebra, M.P., Baldini, N. Osteoclast differentiation from human blood precursors on biomimetic calcium-phosphate substrates. "Acta biomaterialia", 1 Març 2017, vol. 50, p. 102-113.
URIhttp://hdl.handle.net/2117/104354
DOI10.1016/j.actbio.2016.12.013
ISSN1742-7061
Publisher versionhttp://www.sciencedirect.com/science/article/pii/S174270611630681X