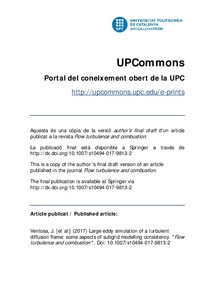 Document typeArticle
Rights accessOpen Access
Abstract
In the context of Large Eddy Simulation (LES) solely for the momentum transport equation there may be found several models for the turbulent subgrid fluxes. Furthermore, among those relying on the eddy diffusivity approach, each model may be based on different invariants of the strain rate. Besides, when heat and mass transfer are also considered, closures for the subgrid turbulent scalar fluxes are also required. Hence, different model combinations may be considered. Additionally, when other physical phenomena are included, such as combustion, further subgrid modelling is involved. Therefore, in the present study a LES simulation of a turbulent diffusion flame is performed and different combination of subgrid models are used in order to analyse the numerical effects in the simulations. Several models for the turbulent momentum subgrid fluxes are considered, both constant and dynamically evaluated Schmidt numbers. Regarding combustion, in the context of the Flamelet/Progress-Variable (FPV) model, with an assumed probability density function for the turbulent-chemistry interactions and four different closures for the subgrid mixture fraction variance are considered. Hence, a large number of model combinations are possible. The present study highlights the need for a consistent closure of subgrid effects. It is shown that, in the context of an FPV modelling, incorrect capture of subgrid mixing results in a flame lift-off for the studied flame (DLR A diffusion flame), even though experimentally an attached flame was reported. It is found that a consistent formulation is required, that is, all subgrid closures should become active in the same regions of the domain to avoid modelling inconsistencies. In contrast, when the classical flamelet approach is used, no lift-off is observed. The reason is that the classical flamelet includes only a limited subset of the possible flame states, i.e. only includes burning flamelets and extinguished flamelets for scalar dissipation rates past the extinction one.
Description
This is a copy of the author 's final draft version of an article published in the journal Flow turbulence and combustion. The final publication is available at Springer via http://dx.doi.org/10.1007/s10494-017-9813-2
CitationVentosa-Molina, J., Lehmkuhl, O., Perez, C., Oliva, A. Large eddy simulation of a turbulent diffusion flame: some aspects of subgrid modelling consistency. "Flow turbulence and combustion", 26 Abril 2017, vol. 99, num. 1, p.209-238.
URIhttp://hdl.handle.net/2117/104310
DOI10.1007/s10494-017-9813-2
ISSN1386-6184
Publisher versionhttp://link.springer.com/article/10.1007%2Fs10494-017-9813-2
Collections
Share: