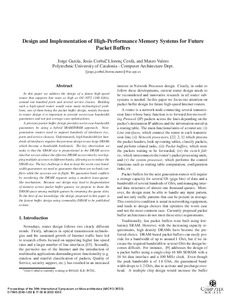 Document typeConference report
PublisherInstitute of Electrical and Electronics Engineers (IEEE)
Rights accessOpen Access
Abstract
In this paper, we address the design of a future high-speed router that supports line rates as high as OC-3072 (160 Gb/s), around one hundred ports and several service classes. Building such a high-speed router would raise many technological problems, one of them being the packet buffer design, mainly because in router design it is important to provide worst-case bandwidth guarantees and not just average-case optimizations. A previous packet buffer design provides worst-case bandwidth guarantees by using a hybrid SRAM/DRAM approach. Next-generation routers need to support hundreds of interfaces (i.e., ports and service classes). Unfortunately, high bandwidth for hundreds of interfaces requires the previous design to use large SRAMs which become a bandwidth bottleneck. The key observation we make is that the SRAM size is proportional to the DRAM access time but we can reduce the effective DRAM access time by overlapping multiple accesses to different banks, allowing us to reduce the SRAM size. The key challenge is that to keep the worst-case bandwidth guarantees, we need to guarantee that there are no bank conflicts while the accesses are in flight. We guarantee bank conflicts by reordering the DRAM requests using a modern issue-queue-like mechanism. Because our design may lead to fragmentation of memory across packet buffer queues, we propose to share the DRAM space among multiple queues by renaming the queue slots. To the best of our knowledge, the design proposed in this paper is the fastest buffer design using commodity DRAM to be published to date.
CitationGarcía, J., Corbal, J., Cerdà, L., Valero, M. Design and implementation of high-performance memory systems for future packet buffers. A: Annual IEEE/ACM International Symposium on Microarchitecture. "36th Annual IEEE/ACM International Symposium on Microarchitecture, 2003, MICRO-36: proceedings". San Diego, California: Institute of Electrical and Electronics Engineers (IEEE), 2003, p. 372-384.
URIhttp://hdl.handle.net/2117/104301
DOI10.1109/MICRO.2003.1253211
ISBN0-7695-2043-X
Publisher versionhttp://ieeexplore.ieee.org/document/1253211/
Collections
Share: