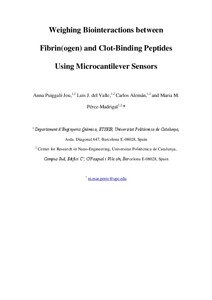 Except where otherwise noted, content on this work is licensed under a Creative Commons license : Attribution-NonCommercial-NoDerivs 3.0 Spain
Abstract
Peptides homing tumor vasculature are considered promising molecular imaging agents for cancer detection at an early stage. In addition to their high binding affinity, improved tissue penetrating ability, and low immunogenicity, they can deliver targeted anticancer drugs, thus expanding therapeutic treatments. Among those, CREKA, a linear peptide that specifically binds to clotted-plasma proteins in tumor vessels, has been recently employed to design bioactive systems able to target different cancer types. Within this context, this paper explores the biorecognition event between CR(NMe)EKA, an engineered CREKA-analog bearing a noncoded amino acid (N-methyl-Glu) that is responsible for its enhanced activity, and clotted-plasma proteins (fibrin and fibrinogen) by nanomechanical detection. Specifically, the tumor-homing peptide was covalently attached via epoxysilane chemistry onto silicon microcantilever chips that acted as sensors during dynamic mode experiments. Before that, each step of the functionalization process was followed by contact angle measurements, interferometry, X-ray photoelectron spectroscopy, and atomic force microscopy, thus revealing the applied protocol as a suitable strategy. The fibrin(ogen)-binding induced by CR(NMe)EKA was detected by the resonance frequency shift of the cantilevers, and a detection limit of 100¿ng/mL was achieved for both proteins. Even though further development is required, this work reflects the promising application of emerging technologies capable of assisting in the comprehension of biological interactions and their implications in the biotechnological field.
Description
This is the peer reviewed version of the following article: “Puiggalí, A., Del Valle, L.J., Aleman, C. and Pérez, M. (2017) Weighing biointeractions between fibrin (ogen) and clot-binding peptides using microcantilever sensors. Journal of peptide science, (23) 2: 162–171.” which has been published in final form at [doi: 10.1002/psc.2938]. This article may be used for non-commercial purposes in accordance with Wiley Terms and Conditions for Self-Archiving."
CitationPuiggali, A., del Valle, LJ., Aleman, C., Pérez-Madrigal, M. M. Weighing biointeractions between fibrin (ogen) and clot-binding peptides using microcantilever sensors. "Journal of peptide science", 1 Febrer 2017, vol. 23, núm. 2, p. 162-171.
URIhttp://hdl.handle.net/2117/104268
DOI10.1002/psc.2938
ISSN1075-2617
Publisher versionhttp://onlinelibrary.wiley.com/doi/10.1002/psc.2938/abstract
Collections
Share: