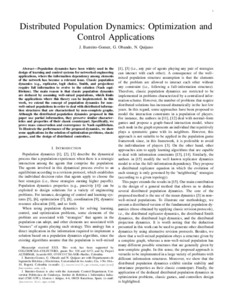 Show full item record
Barreiro Gómez, Julián
Obando, Germán
Quijano Silva, Nicanor
Document typeArticle
PublisherInstitute of Electrical and Electronics Engineers (IEEE)
Rights accessOpen Access
Abstract
Population dynamics have been widely used in the design of learning and control systems for networked engineering applications, where the information dependency among elements of the network has become a relevant issue. Classic population dynamics (e.g., replicator, logit choice, Smith, and projection) require full information to evolve to the solution (Nash equilibrium). The main reason is that classic population dynamics are deduced by assuming well-mixed populations, which limits the applications where this theory can be implemented. In this paper, we extend the concept of population dynamics for nonwell-mixed populations in order to deal with distributed information structures that are characterized by noncomplete graphs. Although the distributed population dynamics proposed in this paper use partial information, they preserve similar characteristics and properties of their classic counterpart. Specifically, we prove mass conservation and convergence to Nash equilibrium. To illustrate the performance of the proposed dynamics, we show some applications in the solution of optimization problems, classic games, and the design of distributed controllers.
Description
© 2017 IEEE. Personal use of this material is permitted. Permission from IEEE must be obtained for all other uses, in any current or future media, including reprinting/republishing this material for advertising or promotional purposes, creating new collective works, for resale or redistribution to servers or lists, or reuse of any copyrighted component of this work in other works.
CitationBarreiro, J., Obando, G., Quijano, N. Distributed population dynamics : optimization and control applications. "IEEE Transactions on Systems, Man, and Cybernetics. Systems", 1 Febrer 2017, vol. 47, núm. 2, p. 304-314.
URIhttp://hdl.handle.net/2117/104264
DOI10.1109/TSMC.2016.2523934
ISSN2168-2216
Publisher versionhttp://ieeexplore.ieee.org/document/7419636/
Collections
Share: