The influence of an increase of the Mediterranean Sea Surface Temperature on two nocturnal offshore rainbands: a numerical experiment 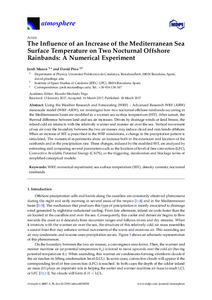 Using the Weather Research and Forecasting (WRF) – Advanced Research WRF (ARW) mesoscale model (WRF–ARW), we investigate how two nocturnal offshore rainbands occurring in the Mediterranean basin are modified in a warmer sea surface temperature (SST). After sunset, the thermal difference between land and sea air increases. Driven by drainage winds or land breeze, the inland cold air interacts with the relatively warmer and moister air over the sea. Vertical movement of sea air over the boundary between the two air masses may induce cloud and rain bands offshore. When an increase of SST is prescribed in the WRF simulations, a change in the precipitation pattern is simulated. The numerical experiments show an increase both in the extension and location of the rainbands and in the precipitation rate. These changes, induced by the modified SST, are analyzed by estimating and comparing several parameters such as the location of level of free convection (LFC), Convective Available Potential Energy (CAPE), or the triggering, deceleration and blockage terms of simplified conceptual models.
CitationMazon, J., Pino, D. The influence of an increase of the Mediterranean Sea Surface Temperature on two nocturnal offshore rainbands: a numerical experiment. "Atmosphere", 18 Març 2017, vol. 8, núm. 58.
URIhttp://hdl.handle.net/2117/104218
DOI10.3390/atmos8030058
ISSN2073-4433
Publisher versionhttp://www.mdpi.com/2073-4433/8/3/58/pdf