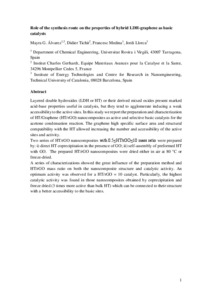 Layered double hydroxides (LDH or HT) or their derived mixed oxides present marked acid-base properties useful in catalysis, but they lead to agglomerate inducing a weak accessibility to the active sites. In this study we report the preparation and characterization of HT/Graphene (HT/rGO) nanocomposites as active and selective basic catalysts for the acetone condensation reaction. The graphene high specific surface area and structural compatibility with the HT allowed increasing the number and accessibility of the active sites and activity of this later. Two series of HT/rGO nanocomposites with 0.5 = HT/rGO = 10 mass ratio were prepared by: i) direct HT coprecipitation in the presence of GO; ii) self-assembly of preformed HT with GO. The prepared HT/rGO nanocomposites were dried either in air at 80 °C or freeze-dried. A series of characterizations showed the great influence of the preparation method and HT/rGO mass ratio on both the nanocomposite structure and catalytic activity. An optimum activity was observed for a HT/rGO = 10 catalyst. Particularly, the highest catalytic activity was found in those nanocomposites obtained by coprecipitation and freeze dried (3 times more active than bulk HT) which can be connected to their structure with a better accessibility to the basic sites.
CitationAlvarez, M., Tichit, D., Medina, F., Llorca, J. Role of the synthesis route on the properties of hybrid LDH-graphene as basic catalysts. "Applied surface science", 28 Febrer 2017, vol. 396, p. 821-831.
URIhttp://hdl.handle.net/2117/104135
DOI10.1016/j.apsusc.2016.11.037
ISSN0169-4332
Publisher versionhttp://www.sciencedirect.com/science/article/pii/S0169433216323959