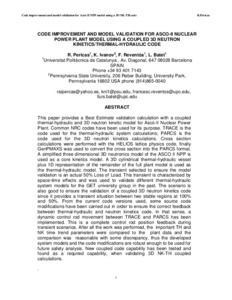 Except where otherwise noted, content on this work is licensed under a Creative Commons license : Attribution-NonCommercial-NoDerivs 3.0 Spain
Abstract
This paper provides a Best Estimate validation calculation with a coupled thermal–hydraulic and 3D neutron kinetic model for Ascó-II Nuclear Power Plant. Common NRC codes have been used for its purpose. TRACE is the code used for the thermal–hydraulic system calculations; PARCS is the code used for the 3D neutron kinetics calculations. Cross section calculations were performed with the HELIOS lattice physics code, finally GenPMAXS was used to convert the cross section into the PARCS format. A simplified three dimensional 3D neutronics model of the Ascó II NPP is used as a core kinetics model. A 3D cylindrical thermal–hydraulic vessel plus 1D representation of the remainder of the full plant model is used as the thermal–hydraulic model. The transient selected to ensure the model validation is an actual 50% Loss of Load. This transient is characterized by space–time effects and was used to validate different thermal–hydraulic system models for the GET university group in the past. The scenario is also good to ensure the validation of a coupled 3D neutron kinetics code since it provides a transient situation between two stable regions at 100% and 50%. From the current code versions used, some source code modifications have been carried out in order to ensure the correct feedback between thermal–hydraulic and neutron kinetics code. In that sense, a dynamic control rod movement between TRACE and PARCS has been implemented. This is a complete control rod position feedback during transient scenarios. After all the work was performed, the important TH and NK time trend parameters were compared to the plant data and the comparison was reasonable with some discrepancy, thus the developed system models and the code modifications are robust enough to be used for future safety analysis. New coupled code capability has been tested and found as a required capability, when validating 3D NK–TH coupled calculations.
CitationPericas, R., Ivanov, K., Reventós, F., Batet, L. Code improvement and model validation for Asco-II Nuclear Power Plant model using a coupled 3D neutron kinetics/thermal-hydraulic code. "Annals of nuclear energy", 1 Gener 2016, vol. 87, p. 366-374.
URIhttp://hdl.handle.net/2117/104075
DOI10.1016/j.anucene.2015.09.024
ISSN0306-4549
Publisher versionhttp://www.sciencedirect.com/science/article/pii/S0306454915004685
Collections
Share: