A velocity based active vibration control of hysteretic systems 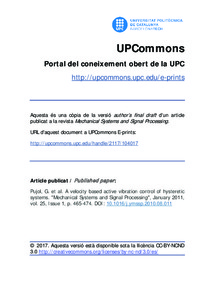 Document typeArticle
Rights accessOpen Access
Abstract
Hysteresis is a property of systems that do not instantly follow the forces applied to them, but react slowly, or do not return completely to their original state. A velocity based active vibration control, along with a special class of hysteretic models using passive functions are presented in this paper. This hysteretic model is based on a modification of the Bouc–Wen model, where a nonlinear term is replaced by a passive function. The proposed class retains the rate-independence property of the original Bouc–Wen model, and it is able to reproduce several kinds of hysteretic loops that cannot be reproduced with the original Bouc–Wen model. Using this class of hysteretic models, a chattering velocity-based active vibration control scheme is developed to mitigate seismic perturbations on hysteretic base-isolated structures. Our hysteretic model is used because of its simplicity in proving the stability of the closed-loop system; i.e., a controller is designed using the proposed model, and its performance is tested on the original hysteretic system, modeled with Bouc–Wen. Numerical experiments show the robustness and efficiency of the proposed control algorithm.
CitationPujol, G., Acho, L., Pozo, F., Rodriguez, A., Vidal, Y. A velocity based active vibration control of hysteretic systems. "Mechanical systems and signal processing", Gener 2011, vol. 25, núm. 1, p. 465-474.
URIhttp://hdl.handle.net/2117/104017
DOI10.1016/j.ymssp.2010.08.011
ISSN0888-3270
Publisher versionhttp://adsabs.harvard.edu/abs/2011MSSP...25..465P
Collections
Share: