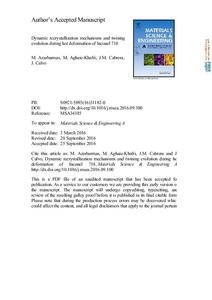 Document typeArticle
Rights accessOpen Access
Abstract
The hot deformation behavior of an IN718 superalloy was studied by isothermal compression tests under the deformation temperature range of 950–1100 °C and strain rate range of 0.001–1 s-1 up to true strains of 0.05, 0.2, 0.4 and 0.7. Electron backscattered diffraction (EBSD) technique was employed to investigate systematically the effects of strain, strain rate and deformation temperature on the subgrain structures, local and cumulative misorientations and twinning phenomena. The results showed that the occurrence of dynamic recrystallization (DRX) is promoted by increasing strain and deformation temperature and decreasing strain rate. The microstructural changes showed that discontinuous dynamic recrystallization (DDRX), characterized by grain boundary bulging, is the dominant nucleation mechanism in the early stages of deformation in which DRX nucleation occurs by twining behind the bulged areas. Twin boundaries of nuclei lost their ¿3 character with further deformation. However, many simple and multiple twins can be also regenerated during the growth of grains. The results showed that continuous dynamic recrystallization (CDRX) is promoted at higher strains and large strain rates, and lower temperatures, indicating that under certain conditions both DDRX and CDRX can occur simultaneously during the hot deformation of IN718.
CitationAzarbarmas, M., Aghaie-Khafri, M., Cabrera, J., Calvo, J. Dynamic recrystallization mechanisms and twining evolution during hot deformation of Inconel 718. "Materials science and engineering A. Structural materials properties microstructure and processing", 15 Desembre 2016, vol. 678, p. 137-152.
URIhttp://hdl.handle.net/2117/103952
DOI10.1016/j.msea.2016.09.100
ISSN0921-5093
Publisher versionhttp://www.sciencedirect.com/science/article/pii/S0921509316311820
Collections
Share: