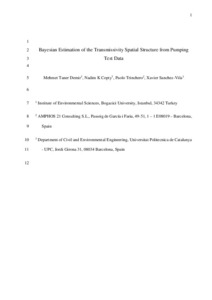 Except where otherwise noted, content on this work is licensed under a Creative Commons license : Attribution-NonCommercial-NoDerivs 3.0 Spain
Abstract
Estimating the statistical parameters (mean, variance, and integral scale) that define the spatial structure of the transmissivity or hydraulic conductivity fields is a fundamental step for the accurate prediction of subsurface flow and contaminant transport. In practice, the determination of the spatial structure is a challenge because of spatial heterogeneity and data scarcity. In this paper, we describe a novel approach that uses time drawdown data from multiple pumping tests to determine the transmissivity statistical spatial structure. The method builds on the pumping test interpretation procedure of Copty et al. (2011) (Continuous Derivation method, CD), which uses the time-drawdown data and its time derivative to estimate apparent transmissivity values as a function of radial distance from the pumping well. A Bayesian approach is then used to infer the statistical parameters of the transmissivity field by combining prior information about the parameters and the likelihood function expressed in terms of radially-dependent apparent transmissivities determined from pumping tests. A major advantage of the proposed Bayesian approach is that the likelihood function is readily determined from randomly generated multiple realizations of the transmissivity field, without the need to solve the groundwater flow equation. Applying the method to synthetically-generated pumping test data, we demonstrate that, through a relatively simple procedure, information on the spatial structure of the transmissivity may be inferred from pumping tests data. It is also shown that the prior parameter distribution has a significant influence on the estimation procedure, given the non-uniqueness of the estimation procedure. Results also indicate that the reliability of the estimated transmissivity statistical parameters increases with the number of available pumping tests.
CitationTaner, M., Copty, N., Trinchero, P., Sanchez-Vila, X. Bayesian estimation of the transmissivity spatial structure from pumping test data. "Advances in water resources", Juny 2017, vol. 104, p. 174-182.
URIhttp://hdl.handle.net/2117/103926
DOI10.1016/j.advwatres.2017.03.021
ISSN0309-1708
Publisher versionhttp://www.sciencedirect.com/science/article/pii/S0309170816307631
Collections
Share: