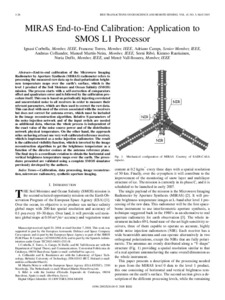 Document typeArticle
PublisherIEEE-INST ELECTRICAL ELECTRONICS ENGINEERS INC
Rights accessOpen Access
All rights reserved. This work is protected by the corresponding intellectual and industrial property rights. Without prejudice to any existing legal exemptions, reproduction, distribution, public communication or transformation of this work are prohibited without permission of the copyright holder
Abstract
End-to-end calibration of the Microwave Imaging Radiometer by Aperture Synthesis (MIRAS) radiometer refers to processing the measured raw data up to dual-polarization brightness temperature maps over the earth's surface, which is the level 1 product of the Soil Moisture and Ocean Salinity (SMOS) mission. The process starts with a self-correction of comparators offset and quadrature error and is followed by the calibration procedure itself. This one is based on periodically injecting correlated and uncorrelated noise to all receivers in order to measure their relevant parameters, which are then used to correct the raw data. This can deal with most of the errors associated with the receivers but does not correct for antenna errors, which must be included in the image reconstruction algorithm. Relative S-parameters of the noise injection network and of the input switch are needed as additional data, whereas the whole process is independent of the exact value of the noise source power and of the distribution network physical temperature. On the other hand, the approach relies on having at least one very well-calibrated reference receiver, which is implemented as a noise injection radiometer. The result is the calibrated visibility function, which is inverted by the image reconstruction algorithm to get the brightness temperature as a function of the director cosines at the antenna reference plane. The final step is a coordinate rotation to obtain the horizontal and vertical brightness temperature maps over the earth. The procedures presented are validated using a complete SMOS simulator previously developed by the authors.
CitationCorbella, I.; Torres, F.; Camps, A.; Colliander, A.; Martín-Neira, M.; Ribó, S.; Rautiainen, K.; Duffo, N.; Vall-llossera, M. MIRAS end-to-end calibration: application to SMOS L1 processor. IEEE Transactions on geoscience and remote sensing, 2005, vol. 43, núm. 5, p. 1126-1134.
URIhttp://hdl.handle.net/2117/1039
ISSN0196-2892
Collections
Share: