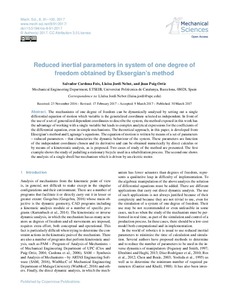 Document typeArticle
Rights accessOpen Access
Abstract
The mechanisms of one degree of freedom can be dynamically analysed by setting out a single differential equation of motion which variable is the generalized coordinate selected as independent. In front of the use of a set of generalized dependent coordinates to describe the system, the method exposed in this work has the advantage of working with a single variable but leads to complex analytical expressions for the coefficients of the differential equation, even in simple mechanisms. The theoretical approach, in this paper, is developed from Eksergian’s method and Lagrange’s equations. The equation of motion is written by means of a set of parameters – reduced parameters – that characterize the dynamic behaviour of the system. These parameters are function of the independent coordinate chosen and its derivative and can be obtained numerically by direct calculus or by means of a kinetostatic analysis, as is proposed. Two cases of study of the method are presented. The first example shows the study of pedalling a stationary bicycle used in a rehabilitation process. The second one shows the analysis of a single dwell bar mechanism which is driven by an electric motor.
CitationCardona, S., Jordi, L., Puig-Ortiz, J. Reduced inertial parameters in system of one degree of freedom obtained by Eksergian’s method. "Mechanical sciences", 30 Març 2017, vol. 8, núm. 1, p. 91-100.
URIhttp://hdl.handle.net/2117/103883
DOI10.5194/ms-8-91-2017
ISSN2191-9151
Publisher versionhttp://www.mech-sci.net/8/91/2017/
Collections
Share: